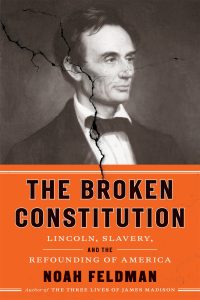 Abraham Lincoln is often called the Great Emancipator. Yet perhaps his equally valuable contribution to the rights of American citizens was to rip up the Constitution of 1787 and replace it with the one we have today. The original Constitution, nowhere included a stated commitment to equality for each of us. It was a document built on compromise, which accepted the enslavement of those who came to our shores from Africa and held back rights to many others, including women and those who were not white, male property owners. Lincoln took extra-Constitutional measures to replace pre Civil War America with one that aspires to become a more moral country. Where we are in the process of ‘becoming’ remains an open question, but certainly is a far cry from 19th century America. In his compelling book, ‘The Broken Constitution’, Harvard Law Professor, Noah Feldman portrays the struggles Lincoln went through to make the war one more about emancipation than his initial goal of preservation of the Union. As a podcast dedicated to the future, we ask this great scholar to weigh in on the challenges the Union faces today.