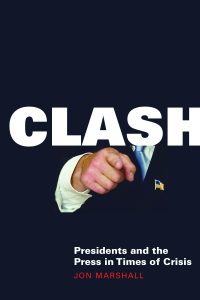 Clearly, Donald Trump’s relationship with the press was a contentious one as he continually called into the question their legitimacy and the accuracy of their reporting. Often he shorthanded the relationship with the simple handle of ‘fake news’. While many factors went in to making this back and forth particularly destructive in relation to previous norms, the fact that it came at a time when social media allowed the President to circumvent the traditional media made the interaction fraught for exacerbating political polarization. However, we must go back throughout our history to see that many previous presidents also had their skirmishes with the press to the point where things like the Sedition Act and the Espionage Act were invoked against member of the press. The political ideology of a President is less a factor in these divides than the ability of the President to have a good working relationship with the press and an understanding of its role in covering the White House. A good recent example of that was the relationship Ronald Reagan maintained with the press corps. As the power of the Presidency grows it is important to understand the role of the press and John Marshall, a professor at Northwestern University, breaks it down for us in his book ‘Clash: Presidents and the Press in Times of Crisis’ and on today’s podcast.