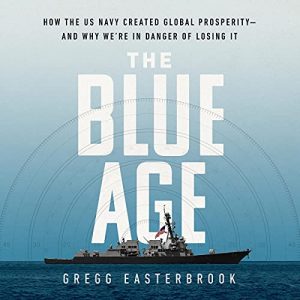 The waters around the world have been calm for the last seventy five years because America’s Navy has played a crucial role in keeping them open and navigable for countries to trade and build prosperity for a greater percentage of the population worldwide than ever before.  Before the applause dies down about that positive role, we need to be sanguine about the fact that there loom factors that threaten both global trade and peace on the blue waters.  That’s the thesis of our guest, Gregg Easterbrook, author of his new book, ‘The Blue Age’.  Most concerning is the growing naval arms race that is underway.  In 1990, China launched about 3 percent of the world’s new ships.  It is now building 40 percent of the world’s shipping.  At the same time there is a question as to whether America can maintain its ‘forward placement of American power’ around the globe.  Easterbrook explains concepts like intermodal transport which only become important to us when we recognize its critical role in maintaining a functioning supply chain.  He makes critically valuable contributions to our understanding of how what’s happening on the open waters has such direct bearing on our lives here on land.