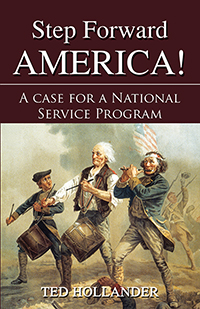 I know one group who hates this idea without going any further.  College presidents.  I can see the Ivy being ripped off the walls just thinking about it.
Other than that group who can argue that citizenship in America really doesn’t require much heavy lifting.  What–going to polls every two years?  And we even complain about that!
We need a month of early voting to find time for it between football games and bar hopping.
And who can argue that with the notion that our understanding of civics and government is slight(ask someone how many branches of the government there are and see how many people consider the Senate and the U S House to add up to 2).
Further, let’s play military bingo and see how many college graduates from the Northeast have worn the uniform.  If you find one, yell ‘bingo’.
In his book, ‘Step Forward America’, Ted Hollander makes a compelling case for a national service program that makes us better citizens.