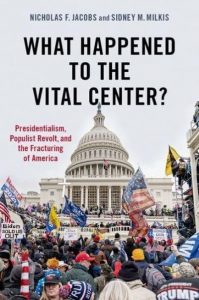 That’s the question posed by our guest in his new book and on this podcast.  The notion of a vital center in American politics has been a subject of inquiry for many years, going back to Arthur Schlesinger, Jr.’s 1949 book “The Vital Center”.  This idea of all of us coalescing around solutions that are sensible is hard to argue with.  Unfortunately, as we see today, the ideal is far from being realized.  The real question is: why?  In the book “What Happened to the Vital Center: Presidentialism, Populist Revolt, and the Fracturing of America”, our guest, Nicholas Jacobs and his co-author, Sidney Milkis, attribute much of the problem to the hollowing out of the party structures today.  They have been replaced by interest group operatives and single-issue advocates.  Coupled with the ever increasing powers of Office of the President and the many responsibilities now handled within, the role of the parties in constructing competing visions of the future to put before the voters has been replaced by actors not concerned with this steadying process.  Republicans in 2020 had no platform.  It was whatever Donald Trump wanted.  And Democrats had a range of ideas from moderate to very progressive and settled on a candidate who was most likely to beat Trump, not set out a bold vision of his party for America.