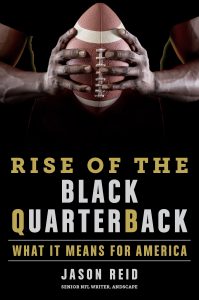 Discrimination has reared its ugly head in America in so many institutions that it’s remarkable that some people still balk at the term ‘institutional racism’.  Case in point: the National Football League.  For years in the earlier part of the century black players were not allowed to compete at all.  Then as pioneers in ownership and management began recruiting black players, the prejudice against a black man playing the coveted position of quarterback continued.  The rap was that they lacked the intelligence and leadership qualities that made the quarterback the most important position in team sports.  Even if they played the position in college, generally in the pros they were converted into wide receivers or safety backs.  While they may have been the best athletes on the team, they lacked another attribute: whiteness.  Today, that is all changing as the black quarterback, strong of leg and arm, is now succeeding in ways previously imagined.  The names Patrick Mahomes, Kyler Murray, Lamar Jackson and Dak Prescott are paving a new frontier which will likely result in African-Americans accounting for half or more the pro quarterbacks in the period ahead.  Jason Reid, senior NFL sports writer at Andscape, an ESPN platform, and author of “Rise of the Black Quarterback”, joins us to discuss.